We Got a Problem

We spent practically the whole period (35-ish minutes) on one problem today. This one, that Justin wrote about recently, that he found on Five Triangles: 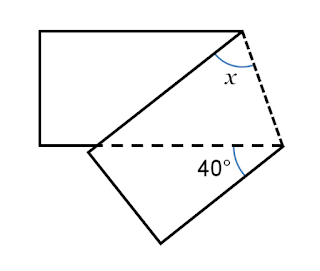 Since we just spent a few days naming pairs of angles made by parallel lines and proving what's congruent and what's supplementary, I was provisionally hoping we'd get, at the end, 10 or so minutes for students to present various solutions to the class. That did not happen in any of my three class periods. Because I didn't have the heart to interrupt them. At the 10-minutes-left mark, too many were still making passionate arguments to their small groups about why they thought their solution worked.

Here's what we did: The big whiteboards were on the tables. Groups of 3 or 4. I stated the problem while showing this diagram. Made a big deal of starting with a regular old piece of copier paper and making a single fold. 3-5 minutes silent, individual think time. No class made it to 5 minutes without a buzz starting. I wrote a time on the board and said, by this time, everyone in your group needs to be prepared to present a solution to the class. Also, the answer is not as important as the reasoning that got you there. If you are saying something like "this angle has this many degrees," you have to explain the reason why that must be true.

Then I started listening and circulating. There was almost 100% engagement, and I have to think it's due, to a high degree, to the problem itself. This problem just felt do-able, but not obvious, to every learner in the room -- the sweet spot.

When a group would start crowing, in their 9th grade way, that "MISS NOWAK. WE GOT IT," I refused to confirm or deny that their answer was right, and asked a randomly selected group member (everyone was supposed to be able to explain the solution) to walk me through the reasoning. I played the role of highly annoying and dense skeptic. "Wait, how did you know that angle was 90?" "Because it's a RIGHT ANGLE." "Wait, how do you know it's a right angle?" "... ... ...BECAUSE A SHEET OF PAPER IS A RECTANGLE." "Oohhh, right." And then, when they got to a part that was not justified (an assumed bisector, an assumed isosceles triangle, trying to use two sets of parallel lines to leap to a conclusion about congruent angles), I wasn't shy about saying I wasn't convinced. In their groups, they had already harvested the low hanging reasoning fruit. I figured my experienced eye was valuable for training a spotlight on flaws in their arguments. And they responded well, in a back-to-the-drawing-board kind of way.

Props
I'm in the habit of slagging myself on here, but I'm going to take a moment and describe a few times I witnessed and celebrated some great, inspired ideas with at least one learner today:
The Value
This seemed evident: the importance of being able to articulate how you know things are true. I think that was one of the purposes of proof that Pershan hit on last summer... knowing why a right answer is right. In a world (of school Geometry) where if I'm careless, I'm too often asking kids to "prove" things that they think are already obvious, I want to make as much room as possible for problems like this where something is not obvious and needs justification.

Questions
I'm not entirely comfortable with leaving 72 kids hanging about what the correct solution was, and why. What I want is for this to keep bugging them, and for them to make little doodles and sketches of it in their spare time, and for them to not be able to leave it alone. I did not want to ruin anyone's fun. At the same time, I think many kids could have benefited and learned from seeing a few different correct arguments for why the angle had to measure 140 degrees. This is still an open question for me -- what's the best way to handle kids/groups that don't arrive at the correct answer? Do you let the question hang, or do you interrupt everybody so groups who made it down a valid path can have time to show what they did? I'd love to pick it up tomorrow, but I'm going to be out (whaddup, #NCTMRichmond!) so we'll have to see if anyone has any memory of what happened today on Monday. 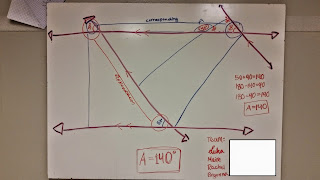 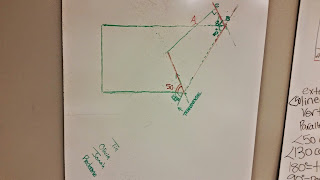 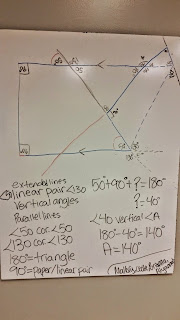 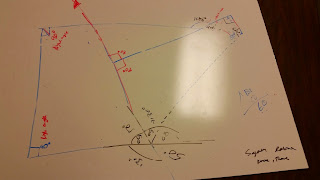