Spirited discussion kicked off my Geometry courses this year. I used a task that is in the IM task bank but not published yet. (Authored by Victoria Peacock and Yenche Tioanda with some revisions by me.)

Update! This task is now published. Here's a link.

For each set of shapes, write down whether you think they are the same or not the same, and explain why you think so. 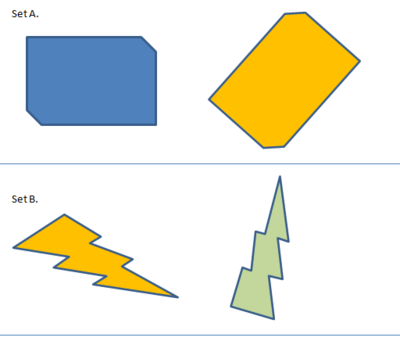 Each group was given a printout of the six set of shapes. (I printed one set per half-sheet, and chopped them into 6 half-sheets before class.) Tools provided for their use (in small bins casually opened on each table without explanation of how they were supposed to use them) were patty paper and scissors.

They had five minutes of individual thinking time, and then they were asked to come to a consensus, for each set, in their groups of three or four. (I should mention that at the beginning of the class, we did ten minutes of Talking Points, described by Elizabeth here. So the expectation was set up that everyone participates, and they already had an opportunity to negotiate the awkwardness of talking to each other.)

The mathematical purpose of the task was to begin to develop a definition of "congruent" based on transformations. That a figure is congruent to another if every point on it can be matched up with every point on the other through a series of reflections, translations, and rotations.

The pedagogical purpose was to begin to illustrate the importance of justification and mutual agreement on definitions in their mathematical conversations. I intentionally used the ambiguous phrases "the same" and "not the same." The idea was that part of the work was for the group to come to a consensus about what "the same" meant in their group. In practice, this went like this:

Other news: my poker face is amazing.

To bring it all together, I wrote on the board "Our definition of the same" and wrote down all the things they hashed out that were okay and not okay. There was disagreement. Some particularly spirited disagreement over sets B (the lightning bolts) and D (the four equilateral triangles... or is it really only two figures?), in particular. If you saw my tweet about the kid thinking like a topologist, he had a passionate defense of his assertion that set B was the same. This was a 100-minute block period, so we had the luxury of letting the discussion happen.

Then I said, okay, so here's a little secret: what we think of as mathematics is just the result of what everyone has agreed on. We could take our definition of "the same" and run with it. In geometry there's a special word "congruent" where specific things, that everyone agrees to like a secret pact, are okay and not okay. Then, I erased "the same" and replaced it with "congruent," and made any adjustments to the definition to make it correct. They had heard the word congruent before, and had the perfectly reasonable middle school understanding that congruent means "same size and shape." I said that that was great in middle school, but in high school geometry we're going to be more precise and formal in our language.

Next up: how to describe transformations precisely.
Posted by Kate at 9:21 AM