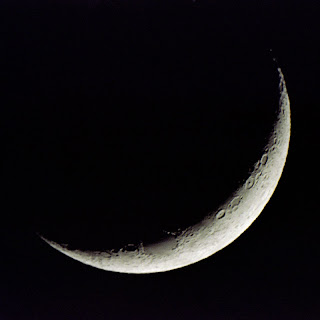 A whole bunch of juniors in high school just left my room, excited to go outside tonight and look up.

Update: Timon made a video that you could use to launch the lesson

I started by showing this: 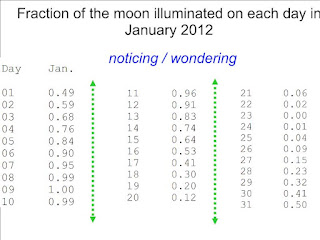 Which is not all that exciting, granted. It's a table of the day in January 2012 vs how much of the moon was illuminated. The data comes from the US Naval Observatory. I explained what was in the columns and asked them to write down one thing they noticed, and one thing they wondered. Thank you, Math Forum. Their noticings were pretty good: the periodic nature, the numbers of full and new moons in January, the fact that few of the values are repeated. Their wonderings, though, were wallowing in lameness. I was hoping for anything, really, that hinted at making predications past January. But, no joy. This is a direct quote: "I don't really wonder anything about the moon."

Anyway, onward. It got better. I said by the end of class they would be able to predict what they would see when they looked up tonight, and know what the moon was doing on their birthday this year, and would know other days this year when there was a full moon.

They followed some instructions for entering values in a table and making a scatter plot on their calculator. Then sketched the scatterplot, and came up with a function to model it. 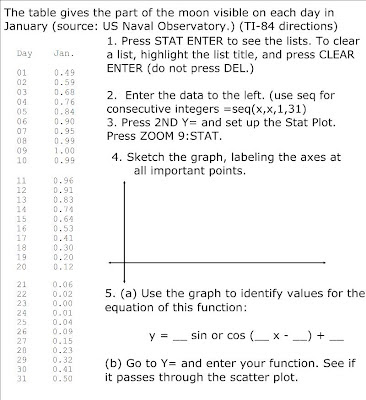 Then they were to use their calculator plot of the function to explore some questions:

- Which days in January had a full moon? A new moon?
(This would seem obvious from the table, but once they have an equation graphed, they forget all about the table! It's kind of weird. I put this question in so they could get their heads around what x and y represented in their functions.)

- How much of the moon is visible today? Discussion of how we'd have to change the calculator's viewing window to "see" today. Or what we'd have to plug in where in their function. Once we realized we needed to know today's Julian date, I gave them: 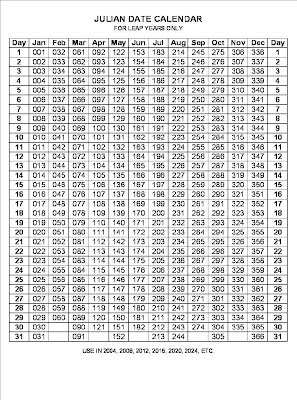 - How much of the moon is/will be visible on your birthday this year?

- On what days this month should we expect a full moon?

It might have started out slow, but by the end of class they were pretty animated. One girl noticed that there was a full moon on both of her parents' birthdays this year (before she noticed they were 30 days apart.) There were some different predictions for tonight based on the slightly different functions students came up with (some of them estimated a phase shift, some of them calculated it by various methods, and some of them pretended there wasn't one.) So, tonight they will look up and see if their model worked.

Open questions:
1. How to create a better hook/act one to prompt more and more interesting wondering questions? Or if anyone has ideas about realistic periodic functions that would be more grabbier, I'm all ears.

2. Would it be better to get an equation of the sinusoidal function by using the regression command on their calculator? More accuracy would take out some of the suspense "who was right?" but on the other hand, we'd have a more reliable prediction of what they would see tonight, and maybe if I was lucky a few kids would think that was kind of cool.
Posted by Kate at 2:53 PM