This Logic Game Needs a Name

This is a game to give Geometry students practice evaluating the truth value of conjunction, disjunction and conditional statements.

This is what one game set looks like, for use by two students: 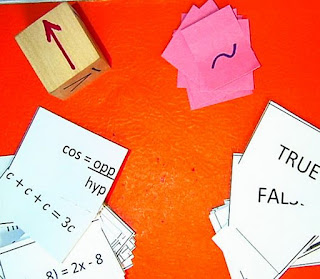 Each set has: 36 statement cards, 18 T/F cards, a cube with logic operations on it, and 4 negation chips. (All the cards are one-sided.) 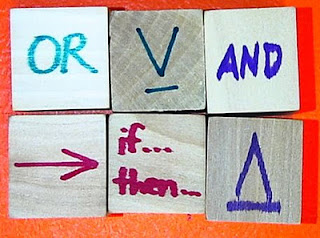 I bought unfinished wooden cubes at a craft store and wrote on them with a Sharpie (hence the bleeding.) I'm sure someone clever will comment with a better way to make these. You could also just use regular 6-sided dice and provide a decoder (rolling a 1 or 2 means "or", etc), but I was in overachiever mode yesterday.
The kids are very much beginners in the Logic unit, so we gradually dialed up on the cognitive load by playing two easier warm-up games before the real game. I also had them set their notes from yesterday out on their desk for reference.


1) Use only the True/False cards and the cube.

2) Distribute half the cards to each player.

4) Game play is like “War.” On each turn, each player flips over one card, and the cube is rolled. The players work together to determine whether the resulting compound statement is True or False. The winner keeps both cards.

5) The game is over when time is up or one person gets all the cards.

So if this happened, "True" would win the round:

But if this happened, "False" would win the round:

We only played Game 1 for a couple minutes, because it's pretty lame. Not very challenging, no strategy, also the "True" player has an advantage, because more of the possible statements come out True. On to...


1) Use only the Statement cards and the cube.

2) Shuffle and randomly distribute 10 cards to each player. I gave them a few minutes to look through them to familiarize themselves with what the statements looked like, and think about whether they were true or false.

4) Game play is like “War.” On each turn, each player flips over one card, and the cube is rolled. The players work together to determine whether the resulting compound statement is True or False. The winner keeps both cards.

5) The game is over when time is up, or when one person gets all the cards.

6) VARIATION: Each player also gets two negation chips. A negation chip can be played at ANY TIME, but can only be used once and must be discarded after use.

So if this happened, False would win the round:

But if this happened, True would win the round:

But if the False player still has a negation chip, she could opt to throw it down, and take the round:

So that was all a warm up to familiarize ourselves with the materials, and remember the stuff we learned about yesterday. Still kind of lame because there's not really any strategy. Finally, we get to play the very fun...

The Real Game (which still needs a good name)


1) Each player gets: 10 Statement Cards, 5 True/False Cards and, 2 Negation Chips. You will be choosing cards to play on each turn, so it’s ok to look at all the cards in your hand. (You could deal out more or less cards if you want the game to take more or less time. This number was manageable for about a ten-minute game. Most groups were able to play two games.)
2) The goal is to get rid of all your cards by making statements that work.

3) Game play is turn-based. On your turn, you select three cards and place them in the field of play: two statement cards and a True/False card.

6) A negation chip can be played at any time. Even after the cube is rolled. However, once a negation chip is used, it must be discarded, whether the resulting statement worked or not.

7) The player that gets rid of all her cards first, wins.

So if a player selected these three cards, and rolled OR, the statement works:

They discard those three cards from their hand and take another turn.

But if a player selected these three cards, and rolled IF THEN, the statement does not work:

And they return the cards to their hand, and lose their turn.

HOWEVER, if they still have negation chips, they could play one now:

and now the statement works, so they can discard these cards and go again.

All the kids were engaged in playing for the whole period. Some of them asked "Can we play this again?" which blew my mind. I intended to do an exit assessment but didn't, so I'll give it to them at the beginning of class tomorrow and see what they retained. If I made new games, I would make the Statement Cards a different color from the T/F cards for easier sorting. It also needs an awesome, catchy name! But I haven't thought of anything worthy yet.

The final version owes a big debt to my colleague Dina Kushnir who talked through the game play with me, and came up with some of the basic mechanics. I'd also like to thank Maria Andersen for all her writing and insights about what makes a good math game - I don't think this would exist without her.

Here are some resources so you can make your own games. Enjoy!
Posted by Kate at 1:18 PM 12 comments:

Here is a picture of the postcards we use that I talked about here. Unfortunately I don't have a digital file used to produce them, but at least you can see what they look like. I find the hand-holding-pen clipart very helpful, don't you? (Oh! That's what I'm supposed to do. Write on it. Thank you, clip art.) 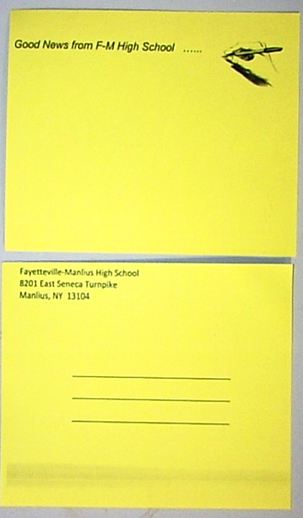 Ever since Riley and I had this exchange, I've been dissatisfied with my classroom's plain door that is not covered in spikes. Well, like, lo: 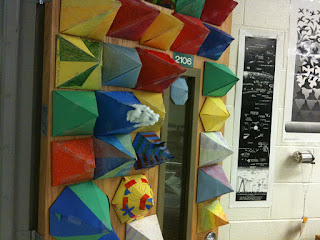 This took three days of class time (129 minutes) for a non-honors Geometry class of almost all tenth graders. Many students also needed some additional time outside of class. The goal was for students to get hands-on grokking for the meanings of height, slant height, surface area, and volume. They designed the net of a pyramid and labeled dimensions, calculated the total surface area and volume of their design, and constructed and decorated the model.

Here is the project description and scoring sheet.

In order to make grading less ultimately-annoying, since they were given lots of flexibility in choosing measurements, I programmed my TI to do calculations for me (link goes to TI-Nspire .tns file.) The vast majority made a square pyramid, and just about every student first decided on the length of a base edge and the slant height, and went from there, so the program takes these measurements as inputs, and returns all the other values they were supposed to calculate. This way, if their numbers match my numbers, I can just move on, and only have to spend more time inspecting their work if there is a discrepancy. 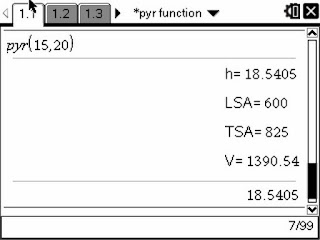 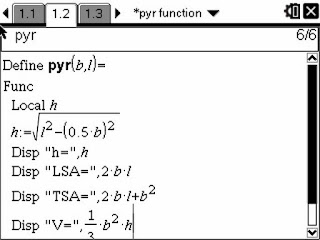 Here is an example of what a student turned in. Since they had to organize their work, I had to say things like "Label EVERYTHING! Make it REALLY EASY for me to grade! I am VERY LAZY and I DON'T CARE if you get a good grade!" That sounds awful but it's funny only because they know neither of those things are true. It would be easier to grade these if you gave them like a template where they had to fill in stuff, but I think there's a ton of value in them deciding how to present their work sometimes. This is hard for me to explain, but when they are in filling-in-blanks mode it's different from figuring-stuff-out mode.

This was pretty fun and a nice break from the usual. I believe the goal of reliably distinguishing both slant height from height, and volume from surface area was achieved. And my door is looking pretty badass. I'd do this again.

Shoulders this project stands on:
Mimi
Riley
Posted by Kate at 1:06 PM 14 comments:

Realizing that "make positive phone calls home" and "reinforce positive behavior" are on every teacher's to-do list, and that some of you regularly do these things, and that I'm not patting myself on the back too much because many of you are more virtuous than I...

But also recognizing that these behaviors being on my good intentions slash nice if I have time list and being on my checked-off list are two different things...

And also not judging myself too harshly for six years of failures in virtuosity...

I'm happy to report that the school providing me with a fresh, stiff pack of yellow postcards that have address blocks on one side and "Good News from FM High School..." on the other side has prompted me to send at least three of these every Friday afternoon to children's homes for...

has been, I wouldn't call it transformative, and I may be imagining it, but I have noticed an additional warm fuzziness, a we're all in this together, a patience in my room with each other and with me...

and I'm going to keep doing the postcards.
Posted by Kate at 8:27 PM 8 comments:

Email ThisBlogThis!Share to TwitterShare to FacebookShare to Pinterest
Labels: assessment

A More Auspicious Beginning to Surface Area and Volume

For a few years, by the time December rolls around, I am so beat up by daily grading, making copies, paperwork, being a good example for the youth of America, etc etc, that my Surface Area/Volume unit has always been just fantastically awful. Although it's been a long December, I was determined to make this at least a little better.

I start with surface areas, because we just spent tons of time working with areas of composite figures and shaded regions, so it makes sense to extend that.

So to start out, instead of this (try not to barf:) 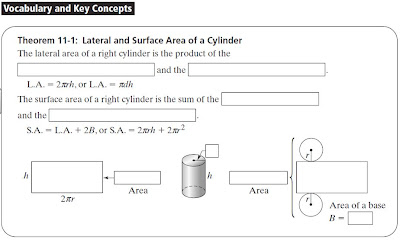 I sneakily ask them to calculate some composite areas. 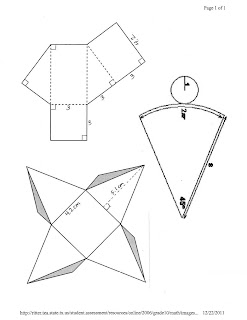 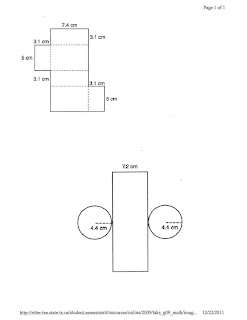 I am not super-thrilled with these. In the future I would make them bigger and use more integral values, and not use such a tall, skinny cone.

As they were working, I asked them to write how they calculated the area in the middle of the shape. So in that last one they might write "Area = 1 rectangle and 2 circles."

The cylinder was VERY interesting, since there's really nothing given about the height of the rectangle, but by now they tend to assume that if they need a dimension, there should be a way to figure it out. Some kids realized we were going to turn it into a cylinder and used the circumference of the circles, but some kids estimated that the height of the rectangle was about three circles, which I didn't anticipate but hey, pi is about 3, and that's kind of awesome.

Anyway, so now we are going to cut these out and hold on to them for a few days. 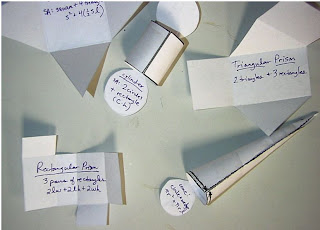 Hopefully avoiding the phenomenon of having no idea which dimensions we need or randomly plugging given numbers into given formulas.

I don't really know where we're going to go from here. I might freak out and go back to a traditional approach, but at least more kids might have a better idea of what those formulas are all about.
Posted by Kate at 12:41 PM 5 comments: