I'm attempting to incorporate triangle centers with constructions. locus, and parts of coordinate geometry, because they all go together anyway. This is one of the things I love about Geometry - there are many topics, but they all relate to each other.

Some of my questions are exact replicas of those found in Exeter Math Book 2. I'll attach all the documents I used, and I know they are imperfect. But this is the basic progression:

Incenter
Where is a point that is equidistant from all sides? Conjecture that there is such a point on Nspire. 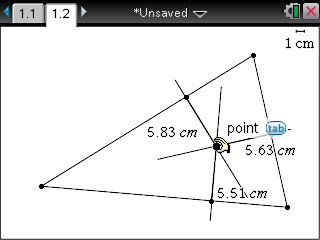 Figure out how to construct it by pouring salt on triangles. 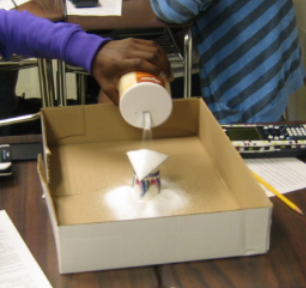 Centroid
After a detour into deriving the midpoint formula... Where is a point that is the center of gravity in a triangle? Use area and coordinate geometry to dissect a triangle into two equal areas. 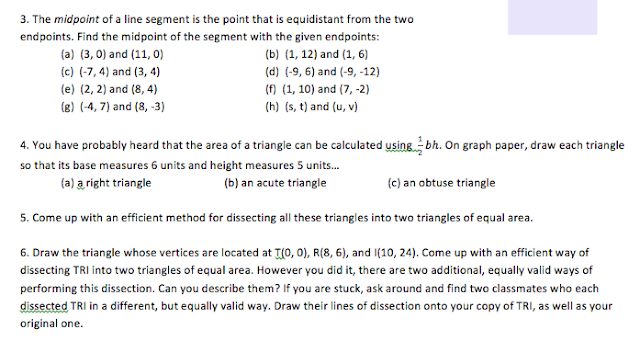 Demonstrate center of gravity by demonstrating that the triangle will balance on that point.

Where is the intersection of the altitudes? This point is not interesting, so get through it as quickly as possible. But take the opportunity to teach what an altitude is.

Then there's an Nspire document with a summative review sheet so that they can keep straight the four different, confusing kinds of triangle centers.

Next we are going to do the famous locus scavenger hunt, after a day of basic locus notes, which will allow me to basically skip the whole pointless locus unit altogether.

And then I think I am going to have the children make their own locus-based scavenger hunt for the towns of Fayetteville and Manlius, for the fun, and for the backwards learning. Though I don't happen to have those documents prepared yet.

Email ThisBlogThis!Share to TwitterShare to FacebookShare to Pinterest
Labels: geometry

It is a little-known fact that I hate icebreakers. "Little-known" in the sense that I don't mention it every five minutes, but if you know me, you could have probably guessed.

Anyway. In previous years I have been frustrated that students in my classes, by the end of the school year, might not even know everyone's name in their class. So this year, I resolved to compel them into an icebreaker every time I changed the seating arrangement.

Well, first of all, what a coup if you have a lesson that depends on discussion and conversation and talking. Because, there is no teeth-pulling necessary to get people to talk about themselves for a couple minutes. And once they have broken the ice, so to speak, you don't have to worry about that component.

And second, how entertaining, and what a fun way to learn about your kids. Yesterday I changed all the seats and I asked the Geometry students (the youngest and traditionally most taciturn of my lot): if you were a Geometry vocabulary word, which one would you be and why? (with the caveat that in 5 minutes I was going to randomly select students to introduce their partner to the group.)

"A line. Because he just keeps going and going."

"A polygon. Because he has many sides."

"A circle. Because she is well-rounded."

You Don't Even Know What Math Is Yet


I tutor mathematics to kids and I can't tell you how many times I hear the words "I'm not good at math". This is from very intelligent kids who aren't out of high school. Honestly, I want to say, you don't even know what math is yet. You don't know the first thing about it or your ability to do it or not do it. I want to tell them that no one is good at math who doesn't work at it.

I think that what separates math people from non-math people in our culture is that math people continue doing math and don't spend anytime thinking they aren't math people. They just keep going on the journey. The older I get, the more it is obvious that a lot of really capable people quit the journey. I admit, this journey isn't for everyone. Its hard work. It takes focus. You have to want to do it. The financial rewards aren't really there in proportion to the work. But what really hurts me is that there are people who want to do it and quit. They change majors, go home, seek other work all because they have it in their heads that they lack talent and aren't naturals. The profession loses when this happens.

Alex has a unique perspective on Mathematics and I always learn from her insights. Professionally, she's a software engineer, but she is also a math enthusiast and evidently tutors kids as well. I am left wondering as a result of this post, what is our role in promoting the "not a math person" label? And what can we do to entice kids to not quit the journey? I have to think that choosing puzzling but accessible tasks is paramount, but hey I do that, and many of them still check out anyway. What else?
Posted by Kate at 11:19 PM 6 comments:

The Nspire Has a Complex Mode... 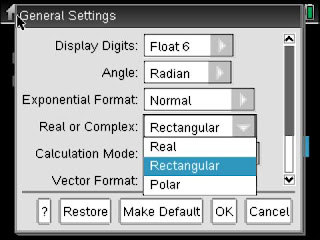 ...not just on the CAS version, but on the numerical version too.

...it's not disabled in test mode.

First, I thought, "the children must never know about this!"

Here are some things it can do: 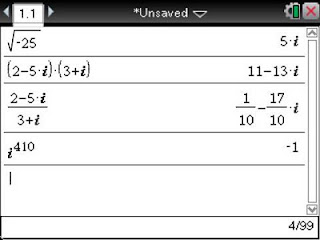 So after I threw out every assessment I used to use for this unit, I settled into the place of "What the *&^% do I do now?"

It made me give some super-serious thought to what the complex number system is good for.

It's good for solving equations that don't have real solutions. Hello there, quadratics! We meet again. A little earlier this year.

It stops the Fundamental Theorem of Algebra from breaking.

It's full of numbers that represent two dimensions.

Email ThisBlogThis!Share to TwitterShare to FacebookShare to Pinterest
Labels: algebra2

This Batch of Children Will Do Just Fine

They didn't seem overly impressed with the origami time-lapse, but I found three (THREE!) secret-admirer origami presents on my desk throughout the day. A water bomb, a box, and a more-different box that looked kind of tulip-y. (When did they find time to make them in the midst of my dazzling instruction? It's a mystery.) (They were impressed by the ~500 views. "WHO ARE ALL THOSE VIEWS?!" "They are mostly my Mom." "Naw Miss Nowak has like 1000 Twitter followers." "WHAT?!" "Yeah she's apparently kind of a big deal." "Why?" "I have no idea.")

A child was making Vi Hart sketches of a triangle with an inscribed circle and infinity-more inscribed circles while waiting for his classmates to finish simplifying $\frac{4+\sqrt{-48}}{2}$. Me: "YOU WATCH VI HART?!?!!" Him: "Yes, I love her." Me: "ME TOO! YOU ARE MY NEW SECRET FAVORITE!"

One child keeps DOING SOMETHING to my rubik's cube in like four moves that I can't undo anywhere near that quickly and it's driving me literally insane. (Just changing the middle square color on all six faces? Wtf. I should be able to undo that THE RUBIKS CUBE HAS INVERSE FUNCTIONS FOR CRYING OUT LOUD.)

Calculus is still a very timid group, extra afraid of being wrong slash anyone knowing they are wrong, but had lots of fun looking into the "there are always two antipodal points on a great circle at the same temperature" thing today. (Which true confession I'm not totally sure is a good use of Intermediate Value Theorem day but I kind of suspect is it, so I went with it.) There was a distinct, entrenched camp arguing "no," and a diverse, poorly-organized camp valiantly arguing "yes," and the "no's" were very gracious when they realized their position was untenable.

They will do just fine indeed thank you.

This all makes up for how I got observed today during quite possibly the worst-ever Geometry class of the year. (Observation the first day back from a four-day weekend? Who does that? We spent 45 minutes recalling the mathematical differences between their assholes and a hole in the ground. Not really but it took ten minutes for someone to summon a vague recollection of having heard of the pythagorean theorem before. I wish I was kidding. Needless to say we did not even get to the dazzling lesson that was planned. Why didn't she come last Thursday? We were pouring salt on triangles. It was epic.)
Posted by Kate at 8:44 PM 14 comments:

I purposely didn't bring any school work home after I spent all day Saturday in school, planning. (We can't get into school on Sundays. Well, we can, but you have to disarm the alarm system, which I am too afraid to try.) I've had trouble this year Turning It Off, and I was trying to force myself into some down time.

Here's what my down time looks like: (or will, until it gets pulled down for copyright violations)

Also, if you're an Nspire person, here's a file with the area proof of the pythagorean theroem.

Days off are exhausting.
Posted by Kate at 9:31 PM 6 comments: