My First Days of School

My first day schtick has changed quite a bit over the years. The first year or possibly two I drank the Wong kool-aid because I was terrified and I had no idea what else to do, and also my school gave us all the Wong book

for free. That didn't work. It probably works for the Wongs but it didn't work for me. I felt like a pretend drill instructor. (Wong. Wong-wah-wah-wong-wong.)

Then for a while I got kids to fill out a sheet about themselves that I stole from Dan Meyer. I had hopes these pieces of paper would capture the essence of each child, and had every intention of perusing them leisurely with loving tenderness. In reality, I just scanned the "Anything going on you want me to know about?" section so I'd have a heads up about all the imminent divorces and cancers and then I threw them in a drawer. Since that only took about ten minutes of day 1, I would just start in on a lesson for the rest of the period. Giddy up!

This year is the first one I feel I started out semi-competently. The cluebird is circling and coming in for a landing. My only measure for this is the proportion of students that will make eye contact when they talk to me.  I considered what I actually wanted to achieve from the interaction (imagine that): I want them to know they can be successful. I do want to start getting to know them, but just as importantly, I want them to know that I want to know them. I want to know who has the tech in their pocket that we can exploit for the learning. I want them to think about what they want to improve about themselves as students, and I want it to dawn on them that it's in their power to change whatever that is. I want them to feel comfortable in my room, to not feel trapped and helpless, at least know some of their classmates' names, know that I expect them to work hard but I'm pretty darn reasonable, and to tell me where funny things are on the Internet. Okay I'm going to stop with this paragraph now because it's getting out of control and was obviously was too ambitious for 43 minutes with 121 strange kids. Ahem.

Phase 1: Snowball Icebreaker
(I saw this on somebody's blog but I can't find where. Speak up and I'll happily give you credit.) Everyone gets 1/2 sheet of paper and writes three distinctive (you will have to give examples of distinctive vs non-distinctive) characteristics about themselves, but not their name. Everyone crumples up the paper, and we toss them around the room (suggested verbiage: "My biggest rule is that you show respect for each other and for me. If you can do that we will get along fine. So there will please be no whipping your snowball at anyone's face. Now, all together, let's pick a direction and gently fling our snowballs.") Everyone picks up a snowball and uncrumples it. Their job is to find its owner and write his/her name on it, and be prepared to introduce this person to the class. Their job is also to facilitate being found. As soon as they do both things, they sit down in the closest empty seat. (Suggested verbiage/modeling: "This is what I don't want to see: (hold up sheet in someone's face) 'IS THIS YER SHEET?!' (pause for giggling.) This is what I do want to see: 'Hi! My name is Kate. What's yours? Audrey? Nice to meet you! Tell me, Audrey, are you allergic to wheat? No? That's too bad. Although fortunate for you, I suppose. Ok, is there anything you'd like to ask me?")

Once the dust settles, start asking kids to introduce each other. This was great fun, because I kept asking for more details that would let them show off a little and/or amuse us all.
"This is James. He works at Wegmans and plays guitar."
Me: "Cool! I wish I could play guitar. What is your best song?"

So that all took 15-20 minutes. I liked it because it fit one of my goals for this year: everything we are doing is for a reason, and we will follow up on things and not drop them without processing them and assessing you and making sure we all got the point (more on my lofty '11-12 goals in a later post.) It also hit several of my goals for day one: some kids learned some other kids' names, it was low-stress and all the chatter made the room feel inviting, I got to learn a little about them and they saw me being interested.

Phase 2: Distribute Books and Collect Data
Then I passed out my heavily modified Who I Am sheets, and the kids worked on them while I passed out textbooks and made smalltalk. This exercise felt different than previous years, because they weren't filling them out all scared in stony silence, but there was productive chatter and informal sharing and it just felt nicer.

Since I asked them questions I actually cared about, it was no drudgery to take all their filled in sheets and read them thoroughly and enter them in a spreadsheet. I sort of had the idea that analysis would yield some interesting things but I don't know what I was thinking. There are six days a year where three of my students have a birthday at the same time...that's kind of neat. I got a roughly even mix of math-likers and -haters: 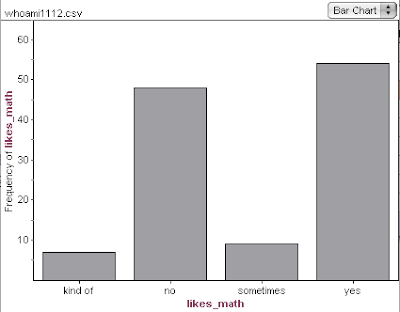 And we have mixed opinions on whether Mathematics is invented or discovered: 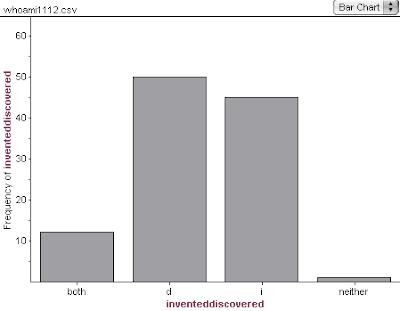 And I suspect that some of the kids who claim they like math, don't know what it is, and like it for all the wrong reasons: 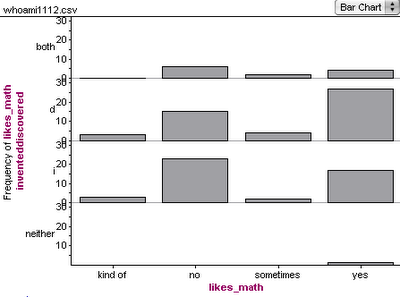 But we will see what we can do to change that.
Phase 3: Some Blah Blah
I spent the last 5-10 minutes telling them about supplies they need and what to do if they have to use the bathroom, that sort of thing. We didn't do any math. I don't feel bad about it. I feel better about the way this year started than I ever did. I'm excited about how we're learning, too. More soon.
Posted by Kate at 8:53 PM

Email ThisBlogThis!Share to TwitterShare to FacebookShare to Pinterest
Labels: lessons