Virtual Conference on Core Values: Mistakes are Made

To sum up the center of my classroom in a phrase: We Make Mistakes. Sometimes deliberately and sometimes not, but we celebrate both kinds.

Non-educators are maybe puzzled at this statement, but all the teachers in the audience have already started nodding along with me.

See, lots of people think that learning happens like this:

and that that sparkly rainbow is the maaaagical majesty that separates good teachers from bad.

But those who have spent some time, you know, actually responsible for other people's learning know that it really happens more like this: 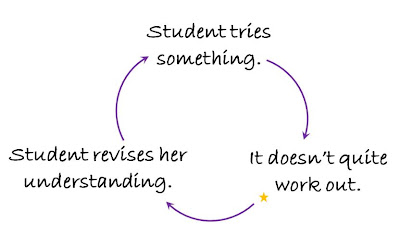 We could just call it "Piaget for Dummies." Other authors have likened the confusion to the conflict in a story. That little star is a place a teacher's skill is really important, because that's the point where kids might feel stupid and check out and also probably hate you for making them feel that way.

So, I'm very deliberate about centering lessons around mistake-making in non-threatening ways. If all my lessons have one thing in common, that would be it. Here are two specific strategies.

The first one became a staple in all my classes late last year and is really just Cornell University's GoodQuestions project, by way of Helen Doerr at Syracuse University, who sums it up this way: "A good question is divisive."

Pose your question. Here is one I plan to use next year in Calculus: 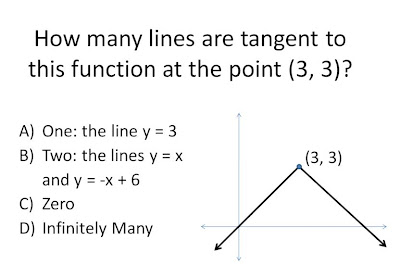 Compel the students to register a choice. You could use clickers, poor-man clickers, or polleverywhere. But it is important that they commit to a choice. And it's best if they can't see what other people selected until everyone's vote is registered. Ideally the responses will be more-or-less evenly distributed, or at least there will be no clear winner. Which is awesome! Because even if it ends up that you're wrong, you can't feel too bad about it if a third of the class agreed with you.

The point is to instigate an argument that can be settled with mathematical justification. If you're not sure how to get the justification ball rolling, try "Would anyone care to defend choice A?" If you're desperate, pass out slips they can write their name on and hand in for participation credit whenever they present an argument. Whatever you do, for goodness sake, don't tell them the right answer. (Like, ever. Let them come to consensus. Learn how to ask helpful questions without giving away the store.) Unless for some reason you want to completely shut down discussion. And thinking. You know you've got a really good question when you don't have to pull teeth to get kids to talk because they are so compelled to explain their reasoning that it overcomes their fear of everybody looking at them.

The Tyranny of Randomness

My second strategy is, I imagine, common in most math classrooms, and that's getting kids to the board to present their work. When I get them at the beginning of the year, they are freaked out by this. Of course. Standing in front of a room of your peers, potentially exposing your ignorance, is super intimidating until you do it a few times and everybody is doing it and you realize it's not such a big deal.

"Will you check it first?"
"We'll all check it together!" (This is not optional!)
"What if it's wrong?"
"That would be awesome! I'm kind of hoping it's wrong actually!" (If anyone points and laughs, I'll kill them!)
"I didn't get an answer..."
"We'd still like to see the progress you made!" (Get up there, kid!)

I've always done this but sometimes have used volunteers, and sometimes have played with ways to randomize selecting students. For example, use the random integer function on the TI and match it to a numbered list of names. I also tried the popsicle sticks, but I am not that organized and kept losing them. Neither of these methods was very satisfying, because they couldn't see the process and had to take my word for it being random. But random selection really helps, here - when any of them could be selected at any time, they become more likely to give a problem some honest effort. Also, if they see a machine pick, they don't blame/hate me for picking on them.

Then last year I found the best thing - SMART Notebook has a flash random word chooser in the gallery (if you can't find it you might need to update the Lesson Activity Toolkit) - so I just have a file saved with a different page for every class with the students' names. When it's time to select a student, I just fire it up and we can all see it ping around before it settles on a name. It's very suspenseful.

Whatever you do, you can't let them off the hook. When selected, they're going to stand in the front of the room and pick up a marker and write something. (Alternatively, going to put their work under the document camera, or whatever process you've worked out.) Or you might as well go back to asking for volunteers, and it will be the same three kids who are the only ones doing work and going to the board.  You'll probably have to be annoyingly insistent for a little while until they become convinced of the inevitability of the situation.

There is a free random word chooser here that seems to work pretty well, but I have not tried it in a class. (And you'll want to turn the sound down/off because, ugh.)

The moral of the story: confusion and mistakes are necessary for learning. So much so, in my opinion, that I center my classes around them! Thanks for attending! Check out the other presentations!
Posted by Kate at 6:00 AM