Teachers : Help me out here. Jessica can benefit so much more from the collective than from just me.

I am a follower of your blog and others who use SBG in their classrooms.  This year I am implementing it with my Algebra classes this year for the first time with the hopes that next year I will be able to do it with my Pre-Algebra classes as well.  I teach 8th grade in a middle school.

I love SBG.  It is working very well, minus a few small issues that I am trying to address.  Since I do not have a blog of my own (school district policy), I am resorted to emailing those that use SBG to find a solution to my issues.  I hope that you are able to help, even though you are busy being a teacher yourself.  If you are not, feel free to pass this along to anyone you think could provide me with some assistance.

Being a math teacher, I love lists:

1. Any suggestions for how to make creating reassessments easier? Even though I do not currently use it to help me, I have Examview available to me, but it is only organized by Chapter in the book, not skill and in order to find the skill I need I have to view ALL problems available for the chapter and weed out what isn't necessary.  I haven't been able to find an easier way, which is why I don't use it.  So then I am finding that my reassessments are mostly hand written and given to the students when they come in.  I want a better way to organize my problems into skill electronically to use from year to year and I can't figure it out.

2. Since I teach middle school, specifically 8th grade, I found that by only keeping track of the highest score (in my hard copy and electronic gradebook), I have NO idea how many times a student has reassessed.  Which causes three problems, one I don't know what specific reassessements per skill they have taken so they don't receive repeats, two I have no way to gauge their continual struggles if I don't know how many times they have taken a reassessment, which also prevents me from sharing that with a parent.  With that information I feel I could have a great discussion with the student and parent about their comprehension of said skill.  And three, I am finding that my students are just coming in to reassess over and over and not coming in to receive help BEFORE reassessing.  I want to find a way to almost force them to come in for help, for example, before their fourth reassessment of a skill, they have to come in for additional help in that skill first.  But then I have to keep track of that information somehow and I don't have enough spots in my gradebook. :)

Okay, I think that is it.  Thank you for reading and if you can't address my questions, please forward them to someone you think could help!

Email ThisBlogThis!Share to TwitterShare to FacebookShare to Pinterest
Labels: assessment

Yesterday on Twitter I asked for false Geometry statements for which it's easy to draw a counterexample. Twitter is brilliant for this - everybody can come up with a-couple-a-three no problem, but it would be a pain to sit and think of a dozen. And even when you did, they might not be the best dozen for your purposes. After waiting a day, I got to pick from lots.

I'm consciously trying to do a better job of motivating proof this year. Many times this will take the form of asking the students to provide a conjecture before we try and prove anything. For example, I have this planned for next week: Start with an isosceles triangle. Make an exterior angle at the vertex. Bisect the exterior angle. What appears to be true? Now prove it. I'm looking forward to using the Nspire for this purpose - they'll quickly be able to look dynamically at tons of examples and bring the inductive reasoning to bear towards a conjecture.

Anyway, I'm getting ahead of myself. On Wednesday we'll be learning about the Triangle Sum Theorem, which they already "know." But a proof is very accessible and uses what we just learned about angles made by parallel lines and a transversal. So I was challenged with how to motivate proving something they already "know."

Hence, my need for false statements.

True or false? If false, draw a counterexample.


1.              All right triangles are isosceles.
2.              All rectangles are similar figures.
3.              All pentagons are regular polygons.
4.              Altitudes are always inside a triangle.
5.              All quadrilaterals with four congruent sides are squares.
6.              For any two lines cut by a transversal, corresponding angles are congruent.
7.              All quadrilaterials have congruent diagonals.
8.              Diagonals of a quadrilateral always intersect.
9.       The three angles in the interior of a triangle sum to 180 degrees.
10.     The acute angles in a right triangle are always complementary.
Kids draw counterexamples. Miss Nowak sticks them up on the document camera. Everyone gets in counterexample drawing mode, remembering that vocabulary, thinking, drawing, etc. Then they get to #9.
"But wait, the angles in a triangle do add up to 180."
"How do you know? Did you draw every possible triangle? And measure their angles? And add them up?"
"No. We learned it in eighth grade."
"But how do you KNOW?"
"My teacher told me."
"Okay, I believe you, but that's not math. That's like maybe some weird sort of religion."
I LOVE THIS. I can't wait for Wednesday. I'm going to leap out of bed and run to school to teach it.
Here are other false statements offered by Twitterzens. There are some great ones here but I had to pick an appropriate mix for my crowd. (Also, if you're wondering who actually answers the questions you throw out into the Twitter-void, follow these rock stars.) Enjoy!

@untilnextstop
all equilateral triangles are congruent to each other.

if it has two pairs of congruent sides, it's a rectangle.

all isosceles right triangles are congruent.

all coplanar points are collinear.

The perimeter of a rectangle is larger than its area.

An altitude of a triangle is also a median.

The center of a triangle's circumcircle is inside of the triangle.

If two circles are the same size, then lines tangent to both of them are parallel.

If two circles intersect, then their two common tangents are parallel.

All trapezoids have 2 congruent sides.

All triangles have a line of symmetry.

A circle's circumference is equal to its area.

Every rectangle is a square.

if diagonals of a quadrilateral are perpendicular, then the quad is a kite.

@Mrs_Fuller
All similar shapes are congruent.

All squares are kites.

@daveinstpaul
Two lines that are perpendicular to a third line are parallel (not true in 3D.)

The diagonals of a quadrilateral always intersect.

@calcdave
if a triangle does not have all equal angles, it is not an isosceles triangle.

No squares have greater area than circles.

@Mrs_LHenry
All rectangles are squares.

All equilateral triangles are right (or obtuse.)

@thescamdog
Any figure with four equal sides is a square.

All pentagons are concave.

All parallelograms are rectangles. 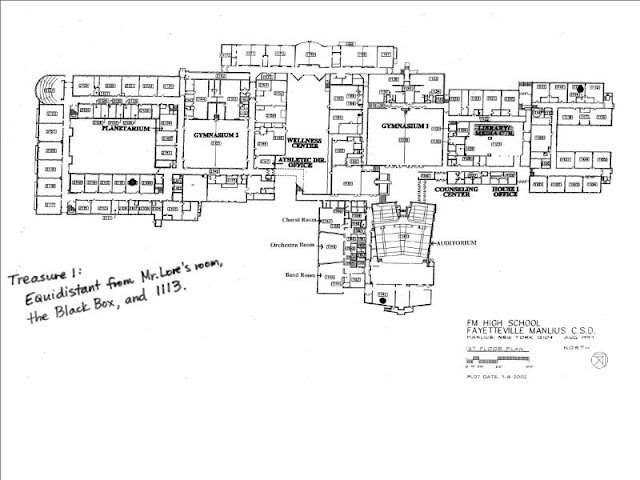