I just completed a 3-day TI-Nspire training that my school contracted TI to come in and do. I haven't tried to teach with it yet, but of course, I have opinions. Let me say right off I don't necessarily think this technology is the right solution for every school, and I'm not trying to sell it to you. I'm just going to talk about what I like and don't like about it, because I know some people are curious, because they've been asking me - hopefully this will be a useful source for people making their own decisions.


Implementation: My school started phasing in the TI-Nspire with last year's freshman class. New students will now be expected to purchase a TI-Nspire handheld ($150 retail) as opposed to a TI-84 ($139 retail). For families who aren't able to purchase their own, we check them out a calculator for the year like a textbook. There are two versions of Nspire: a CAS and a numerical. The students get the numerical. We have a few classroom sets of CAS to share, too. It has a non-qwerty keypad - the keys are in alpha order - this is annoying but makes it more standardized test-compliant.

Functionally/mathematically, as far as I can tell, the technology doesn't do any more for you than say Wolfram Alpha plus Geogebra. It is however very sleek and every bit as good.

It has a learning curve, but no worse than Geogebra or Sketchpad. If you already know either of those applications, you can pretty much hit the ground running.

If you go to one of these trainings (also may require a good relationship with your regional trainer-rep-salesman guy), they bring you lots of swag. 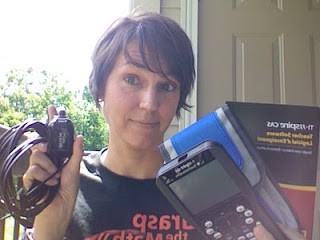 As part of the workshop fee my school paid, I received: a TI-Nspire CAS handheld, a canvas case with extra pockets (for cables, I guess? or maybe candy), a copy of the teacher edition software (emulator and connecting to your class functions), a Belkin hub and four cables for linking up and sending documents out to student handhelds, and a sweet t-shirt.
This is what I see as the big trade-off: Because of the proprietary nature of the software, we're not going to experience the wide-open, awesome universal sharing and embedding we get with Geogebra. This is crappy. However, the trade-off is access - every student should have their own handheld - in their hands in class every day, in their backpack, at home with them at night. I can't say the same for Geogebra. We're not a 1:1 school and won't be any time soon (for many reasons, and cost is only one of them). Getting computers into kids' hands in class every day is rather a hassle at my school. And not every kid has a computer at home (despite my history of getting snippy about it).

TI releases new software versions and hardware updates at a pace that makes Apple look downright sensitive to early adopters. This coming year in Geometry I am going to have kids with both generations of keypads, and it's going to be a nightmare.

The trainers will use TI-Navigator, which is a wireless document transfer/communication between your computer and all the student handhelds. It's seriously impressive. You feel like you're on Star Wars. Or Star Trek. Or some other show with "star" in the title. You probably don't have Navigator. It's $2500.

The instructional materials they make available, while plentiful, well-organized, and technically very nicely designed, are a pedagogical train wreck. Several times during the training, I heard about how a particular investigation + pre-made file required very little thought or work on the part of the teacher or student! As if this were desirable. Mostly, they have the student opening a pre-made file and dragging a point or slider around and looking for what changes or stays the same, which: 1. yawn, and 2. how is that supposed to stick in a brain?

Which begs the question of how to best exploit its capabilities for learning some math better than you can without it. Which I feel is an open question wrt classroom tech in general.

Off the bat I see three really nice uses.

1. Getting a handle on a problem and its constraints. Here is a sweet little problem I just swiped from What's Math Got to Do with It?

, because it happened to be laying around.


If this were not just a screenshot, you could drag the skateboarder, represented by the red point, around the merry-go-round and get a good feel for what the problem is stating and asking. 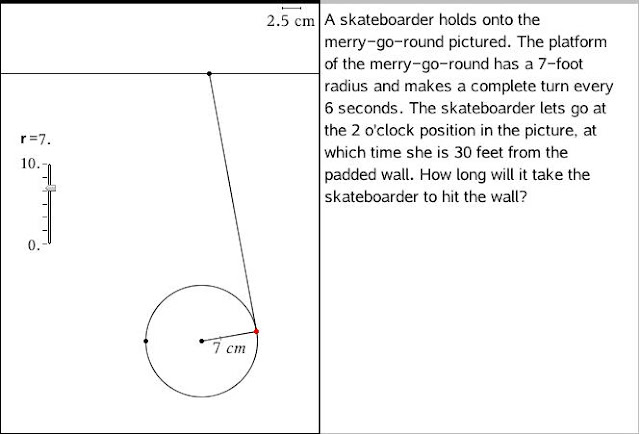 2. Checking a solution by measuring. Ideally I know we love to pose problems where we can see how close we got by, like, playing the end of the video. But until that library reaches critical mass, we have: 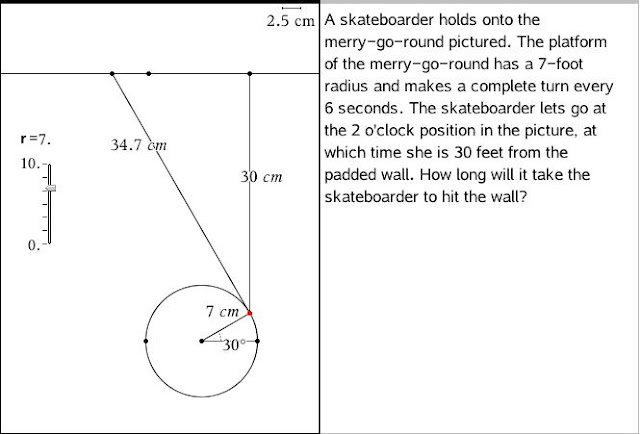 3. Dynamic Notes : A document with a page for each key concept in an instructional unit, grabbable and playwithable. 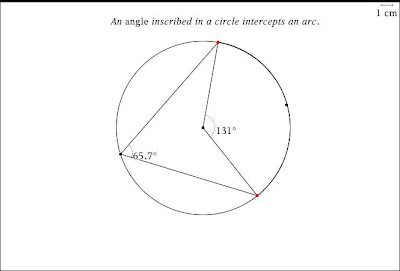 No doubt people have questions... see you in the comments.
Posted by Kate at 3:07 PM 18 comments:

Email ThisBlogThis!Share to TwitterShare to FacebookShare to Pinterest
Labels: technology

Put Your Money Where Your Math-Loving Mouth Is

In my humble estimation, this project is worth your support. You can send as little as $1! But you get some cool stuff if you can send a little more. If you're a fan of the Math for Primates podcast, as I am, it's the same Tom! Check it out! I am particularly looking forward to the six weeks of having my mind bent. More than it is already, natch.