OK I wasn't going to post this story, because I thought it was a tad salacious for a teacher blog, but I'm feeling extra grateful right now for the great suggestions for data to regress (keep them coming!) I don’t respond to comments or feature comments in new posts as much as I would like or probably should. But, I assure you, no word you take the time to send my way goes unread or unappreciated. I'm extremely honored to be a part of this community. To summarize: you all kick serious ass. Thank you.

Today I was walking around the room, and a kid was telling a very suspenseful and dramatic story about driver ed or something, and gesticulating, and as I was walking up behind him, his gesticulating hand crashed right onto my boob. Not like a minor brush, either. He got an unignorable handful. Thank goodness I was wearing a bra today.

He snatches his hand away as if he was burned. I'm making a wide-eyed, silent-scream "!!!!" face at him; he's making the same face back at me.

In my misguided attempt to use humor to diffuse the situation, I say probably the worst possible thing of all things I could say at that moment,


"Geesh. The last guy who did that bought me dinner first."

Child: mortified. Classmates: in hysterics. Somehow, we got on with a math lesson.

So THEN, after school, I look up from my desk, and his mom is standing at my door. I think, "Oh, nooo" and brace for impact.

But, no, she just happened to be at school, and wanted to say hi and check in.

I'm planning a unit for Algebra 2 with Trig called "Function Transformations and Regressions." I'm all set with the transformations part, but I am trying to plan something interesting for the 3 to 4 days of regression analysis. My idea is to give the children a choice of relationships for which they will collect data, graph scatterplots, decide the best model, perform a regression. Then use the function they get to gain insight into the type of relationship and make preditions. Ideally they will present their findings to the group but I don't know if we will have time for that. Also, I'm in the annoying situation of needing to teach them how to do regressions on a TI, but that makes sharing their results very difficult.

I'd like to provide opportunities to explore data that kids might actually be interested in. I'm looking for any more brilliant ideas out there. Ideally where the data is not too difficult to obtain within a 43-minute class period, either by measuring or because it's available online and you can provide a link. (What I'm not looking for, please, pretty please, I beg you, is "SWINE FLU!". The growth and decline of influenza, while interesting, is not appropriate for my purposes. I mean what is that - quadratic growth, followed by linear decline, followed by exponential decay? Piecewise functions are beyond the scope, here.)

I got all the way to number 12 out of 15 on Maria Anderson's Mathtype/Latex challenge before I ran out of my 5 minute Jing time. Fun! Like Typeracer! But math! I used to hate Mathtype/Equation Editor until I learned some shortcuts. Now I'm a keyboard ninja. Here's my video.

Update, if you're curious about shortcuts: If you hover your  mouse over any button in MathType, it will tell you the keyboard shortcut in the lower left corner of the window. The most time-saving ones for me are Ctrl-f (fraction), Ctrl-h (superscript), Ctrl-r (radical), Ctrl-g p (pi), Ctrl-g q (theta), Ctrl-e (plain text), Ctrl-+ (back to math), and Ctrl-F4 (save and go back to document.) To invoke MT from Word, I can type Ctrl-Alt-q, but that might not work for everybody.
Posted by Kate at 10:10 AM 8 comments:

Email ThisBlogThis!Share to TwitterShare to FacebookShare to Pinterest
Labels: technology

"I wouldn't even go to class if I had another teacher. I just come because you're awesome."

KQ likes me because I like gaming, and I'll talk about it with him for a minute before the bell rings, and I refer to people as noobs and things as epic and items as loot, and that's a language he not only understands but viscerally appreciates.

But it makes me wonder. KQ is getting A's in Trig because he likes me, so he'll make an effort. He didn't do very well in math last year, nor the year before. He's not exactly a model student. I believe him when he says he wouldn't do as well with a different teacher.

There are teachers at my school who are universally adored - but - they are either 1. extraordinarily gifted, funny storytellers or 2. conduct easy or widely enjoyable classes*.

Is there a way for mortals to achieve that? In a discipline where we're rigidly held to account for mastery of difficult skills? Is the answer to find a basis to forge a deep affinity with all 125 of them? Or is there some other secret recipe, besides natural charm? I know it's my responsibility to foster a comfortable, cooperative learning environment, and I think I do that well. I've just never been overly worried about being well-liked.

But I would love for them all to do as well as KQ is unexpectedly doing this year.


*I'm not being negative here - just because everybody gets A's if they show up, doesn't mean it's not vitally important. And I know math can be enjoyable, but the mandates of much of our curriculum make that awfully difficult to deliver. Don't you love how I can anticipate comments and get pre-emptively defensive? Blogging hax.
Posted by Kate at 6:56 PM 12 comments:

This got kids asking some really good questions and they seemed to like the activity.  I'm required to teach two-column proofs, but wanted to elevate the drudgery with some higher order thinking.

I asked them to choose two proofs from recent assignments, write them out, except make one major error.

Their ideas of what constitutes a "major error" in a 2-column proof were enlightening. They wrote a list on the board including missing a whole step, using an invalid reason, using parallel lines to conclude the wrong angles are congruent, and assuming something from the way the diagram looks that wasn't given. They decided not to include things like omitting the horizontal bar from a line segment or the congruency squiggle.

Many of them wanted to discuss their idea for messing up their proof. They kept their voices low and hid behind a folder to talk to me. Some of them are very devious. I will be contacting them when I plan my next bank heist.

Before they handed them in, I asked them to describe the error on an attached post-it. They turned in something like this: 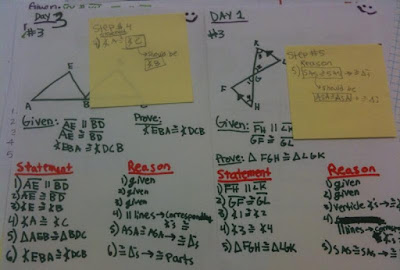 I told them I would copy and redistribute the proofs the next day for them to find the errors.


Notes for next time:

I had them write on blank copier paper. Next time I should probably hand out a template instead. I think a standard format would be easier for everyone to correct, and also to ensure they leave some room between each line.

The post-its were unnecessary. I don't know why I thought that was a good idea.

I have 60 students in Geometry. Checking 120 proofs would be unreasonable, and there were plenty that would have turned out repetitive. I ended up printing four per page, and giving the kids one page to check for errors.

The error checking takes a while, but they didn't need much help with that part. Finding the errors would work fine as a take-home assignment. Then in class we could project a select few and have the kids describe what corrections they would make.

The arguments over when and how to decide a proof was okay were amazing, and worth ten days of plain-old Geometry class. Consider this format for other things, too.

A way to do this same exercise with less paper and more tech? I don't know. They need to be able to create the proofs and then write on the proofs to correct them. Proof-writing kind of defies computer use because of all the symbols and formatting and drawing diagrams. Unless you have like tablets with stylii for all the students, which we don't. Now I'm thinking of maybe like a smart notebook template with all the weird symbols they would need, infinitely cloned, sitting around the edge of the page so they could just drag them into place. But, still. That would definitely take more time and probably be a total disaster.

The students liked that none of the tasks felt super-difficult, and they loved creating something they knew was going to be shared with their peers. A few seized the opportunity to write ASS as a triangle congruence theorem. Whatever. It could have been worse. Fifth period thinks it's hilarious to say "schlongbongler" and I don't know what that is, but it doesn't sound good.

Phew. I'm glad I got all that out. I think I enjoyed writing f(t) more when I mostly used it to reflect on my way-imperfect practice. I need to get back to that.
Posted by Kate at 4:28 PM 16 comments:

For injecting some why-you-might-ever-care-about-this juice into your trigonometric graphing:


In this one the good part starts around 0:08, then again in the final seconds -

Plan - show one clip or both. What are we looking at here? What are the features of the motion? What words would you use to describe it? How might you compare one swimmer's kick with another's? What attributes might you try changing to improve a kick? How does the sun's path differ at other times of the year? At other latitudes? How is it the same? Generally keep poking at it until we describe it as periodic, and mention synonyms for amplitude and frequency. Proceed as usual.

Later in the unit, project a still of the kick trail, and write an equation for it.

If anyone's got other clips of periodic motion bookmarked or favorited, I'd love to see them.
Posted by Kate at 9:34 PM 5 comments: