I Finally Used the Cell Phones for Something 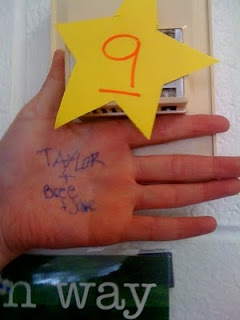 In class the students worked with large (11"x17") maps of the school, compasses, rulers, and locus-type pirate map style clues (100 feet from Miss Nowak's room, and also equidistant from the math hallway and the resource hallway) to narrow down the location of 12 stars I stuck around the school. Then they had the whole next day to look for the stars and send a picture of them standing next to it to a picasaweb drop box for a bonus point.

I'm not going to bother posting documents because obviously they would only work for my school. But, it was fun, and I was proud of myself for thinking to use the phone cameras like that.

And, it seemed much, much easier for the kids to get a hold of the locus concepts when it was tied to a concrete map of the school. For some reason saying "equidistant from room 2122 and 2126" has magical super powers that "equidistant from two points" does not. Weird.

Update: Here are the files, for whatever they are worth.
Posted by Kate at 9:39 PM