Choose Your Own Adventure

I can't believe it took so long for Choose Your Own Adventure to show up on Youtube. There has to be some justification for showing it in a math classroom. Every film has two options? Exponential growth? I'll think of something.

Edit: Here is the file you can download and edit.

(Alternate Title: What is a Radian?)

What I wanted them to grok: 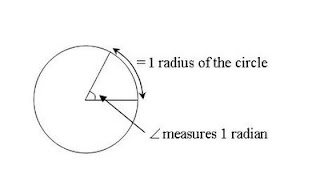 Discussed before they started: what is pi? Could you cut a string exactly pi inches long? Most of them said "no". They thought it was theoretically possible, but couldn't be measured precisely enough. I promised them that they'd walk out of class with a string of length pi in their pocket.

1. Measure the diameter of
your circular object. Calculate the radius to the nearest 10th of a centimeter and record: r = _______ cm

2. Cut a strip of paper at least 8 times longer than your radius, and tape it to a flat surface.

3. With a marker, make a mark on the edge of your circular object. Make a corresponding mark near the end of your strip of paper. Line up the two marks, then roll your circular object one complete revolution. Make a second mark on the paper at exactly one complete revolution. What does the distance between the two
marks on the paper represent? Verify this value by using the radius to calculate
it.

4. Cut a length of string the same length as the distance between the marks. Set it aside.

5. Using one of the marks on your strip of paper as "zero", use your ruler and a pencil to mark off intervals along the paper of the same length as your radius. About how many radii before you get to the one-revolution mark? This value should be the same for all of the various circles. Why?

6. Take your length of string, fold it in half, and cut it exactly in half. This string is precisely pi long. You and your partner can walk around all day with pi in your pocket! The question is….

At the appropriate time we discussed this, and came around to "pi radii of the circle". Many of them still didn't like this and insisted it "wasn't really pi", so we had to have the discussion about operating in the perfectly abstract realm...some of them noticed that if their circle had a radius of exactly one centimeter, then the string would be pi centimeters...that seemed to help. Then I had them convert a bunch of degree measures to radians and back, and come up with formulas.

The scary thing was, most of them didn't recognize it from last year until they started writing down a formula. But I'm hoping that more of them actually know what the heck a radian is, and this makes the unit circle a slightly easier mountain to climb. We shall see.
Posted by Kate at 5:59 PM 21 comments:

I'm sure I'm not the first one to think of this, but this lesson was pleasingly effective. In past years graphing inequalities in two variables was something that seemed easy for the kids in class, but they could never remember what was up when we reviewed it later.

This year, to start off, I had the kids pick the coordinates of three different points (x, y) on the plane, test them in the given inequality, and mark the point with a closed circle if it came out to be true, and an open circle if it came out to be false. After a few minutes I had to say, "If you only got true points, find a point where it comes out to be false." We ended up with a screen that looked like this: 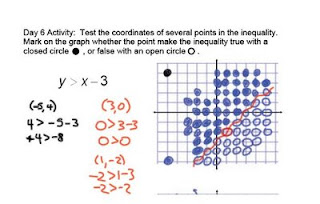 We discussed the significance of the boundary between the blue and white spots, and also tried a few non-integral points. Then I had them try a different one on their own. They developed a very serviceable method for indicating the "true region". One class wanted to write the words "True" and "False" instead of shading, which isn't bad, but I warned them that eventually we'd need to know where two of them overlapped, so they shaded.

This seems like a stunningly obvious approach now that I've tried it, but I thought I'd share since it took me 4 years to think of it. Does anyone do anything similar, or have a better way?
Posted by Kate at 2:08 PM 8 comments:

I know lots of other teachers are veterans, too. I am spending today writing marking period 1 comments, going to see madagascar 2, and grumbling about civilians. So just a quick thanks. And one of my favorite videos from 116, showing the lengths people will go to to keep each other sane in close quarters. They are having so much fun, they almost make me nostalgic for being at sea. Almost.

Email ThisBlogThis!Share to TwitterShare to FacebookShare to Pinterest
Labels: personal

Well it looks cool, but I honestly don't know how much good its doing. I haven't carved enough time out of the curriculum to really make the vocab a part of the course. I feel like we're just slapping copied definitions on the wall. Anyway: 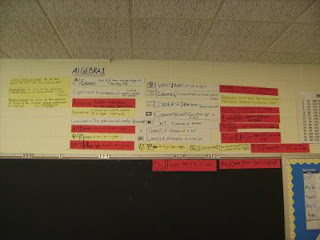 And just for fun, here are some other pictures of my room: 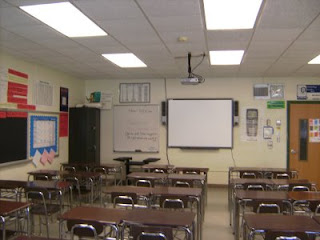 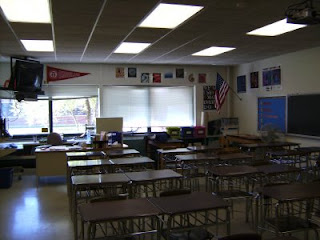